The brown dog tick is named for their dark brown color and their particular proclivity to feast on domestic dogs.

While these ticks rarely bite humans, they will feed on people if there are no canine hosts available.

These ticks should be removed as soon as they are detected, as bites can be painful, itchy, and present a variety of other health problems.

HOW TO IDENTIFY BROWN DOG TICKS

While these ticks prefer dogs, they can also attach themselves to human hosts. They usually attach in warm areas, such as the ears, the back, or between the toes, and after dropping off, a host will quickly found another one in the same vicinity.

These ticks are distinct from other species of ticks in that they can live entirely indoors. This makes the likelihood of picking up a brown dog tick from your pet increasingly more likely than as with other ticks.

While brown dog ticks prefer, as the name implies, to feast on canines, they will readily seek out humans if they do not have a dog host available.

These pests will feed on your blood and lay eggs in the fur of animals, spreading their populations throughout entire home and among multiple hosts.

Ticks can complete an entire life cycle inside and, when populations grow large, these ticks can be seen crawling along floors or walls.

HOW DO YOU GET BROWN DOG TICKS

You can prevent brown dog ticks indoors by maintaining a clean and tidy home. Ticks prefer warm, dry conditions, as well as areas with ample amounts of shelter. If your home is prone to collecting clutter and dirt, this will be a prime spot for ticks to lay their eggs. You should also regularly treat your pet with flea and tick repellents to help prevent ticks in the first place.

HOW TO GET RID OF BROWN DOG TICKS 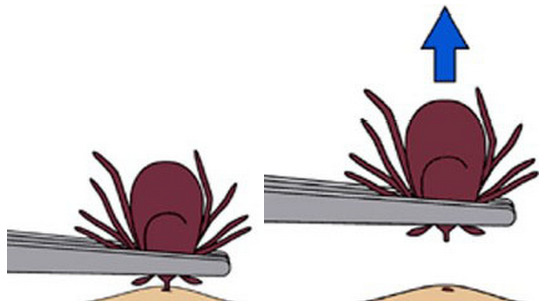 If you happen to contract a brown dog tick, make sure you remove it as soon as possible.

These ticks should be pulled out in their entirety, as a partial tick left in the skin is more likely to transmit diseases.

Use a pair of tweezers to grasp as close to the skin’s surface as possible, and then pull upward with even pressure. Make sure you clean the bite with soap and water afterward and monitor the site for signs of infection such as a rash or other unpleasant reactions.

To reduce brown dog tick populations, clean your entire home using special shampoos and medicated treatments on your pet. Inspect your pet regularly for ticks, and make sure his or her sleeping area is clean and tidy.

In some cases, you may need to apply pesticides, in which case contacting a licensed pest control professional is always the best option.

Although brown dog ticks aren’t nearly as likely as other species of ticks to bite a human; they are capable of transmitting nasty diseases such as Rocky Mountain spotted fever.

This disease, as well as others that can affect your four-legged friend, such as canine babesia and canine ehrlichiosis, can sometimes be fatal.